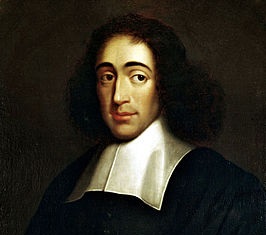 You must not deride, bewail or execrate human actions, but understand them. (1677)

(This tile is temporarily invisible because the Mozes and Aaronchurch is in renovation!)

The quote shows that Spinoza saw mankind as part of the whole of nature. In the same way that objects have causes, so does human behavior. First trying to understand the causes, will get you further than to immediately judge, mock or regret behavior. You can also approach your own behavior this way. If you understand the causes of your behavior, you can accept this better. Like Jan Knol says: ‘There is freedom, but you will only get it by seeing the necessity of everything.’ This doesn’t mean that Spinoza thinks everything is permitted. The state and the rule of law should maintain the safety of all individuals in the state. The power of the state can never be entrusted to an individual: he will abuse it. That is why Spinoza promoted democracy. 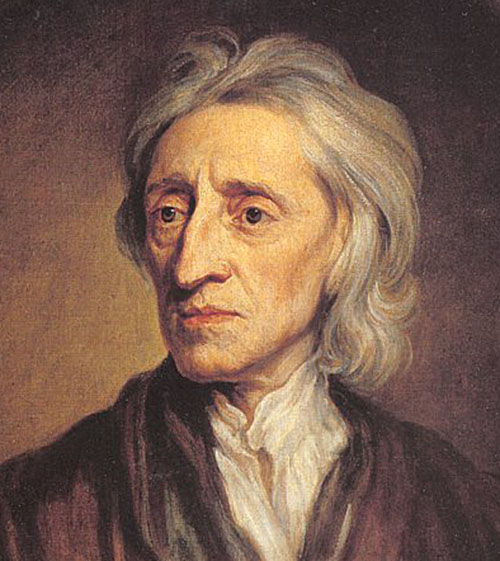 Locke laid the foundation for the notion that every human has natural rights. This is a different view than was considered self-evident in those days, which was that the sovereign was sent by God and he must decide what is supposed to happen. Everyone has to obey to this. Locke places the individual more in the center of the world. He continued building the movement that was started by Descartes.

Locke is also an important advocate of the idea of the social contract, with which the justification for laws came from a collective agreement. This is the foundation of democracy. According to Locke, life, freedom and property are natural, inalienable rights of every person. This is why Locke is seen as the founder of liberalism. All of this comes together in the quote on the tile: every human has control over their own life and their own person.

Locke fled to Amsterdam, because he was wanted in England for supporting the wrong party. But he also had to be careful in the Netherlands; that is why he went into hiding. The only thing we know, is that he probably lived on the Damstraat, but we do not know where exactly. That is why his tile lies on the bridge. 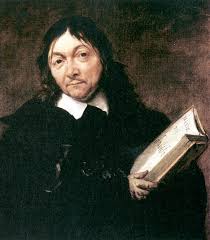 Great things certainly await, if I am happy enough to discover one thing only which is certain and indubitable. (1641)

This quote not only symbolizes the expectations of Descartes himself, but also what his thinking and his encouragement for people to think for themselves has caused. His search for certainty leads him to ‘I think, therefore I am’. You can read more about this at the tile on the Westermarkt. This foundation gives Descartes the confidence to think further.

Descartes states that nature follows laws and is an understandable whole. Newton was inspired by this insight. He decided to find out why everything falls downwards and discovered the law of gravity. Newton confirmed the statement that nature is insightful and understandable. And many others after Newton also confirmed this statement. That is why Descartes is seen as the founder of modern natural science. 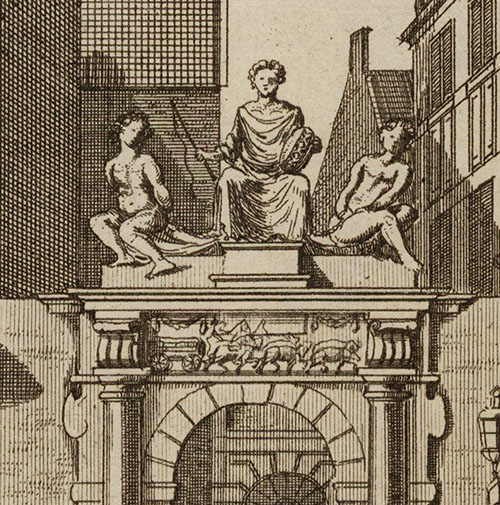 It does not make something true, or change a thing in any way, to say I cannot understand it but I believe it, these are mere empty words that signify nothing. (1668)

This quote shows how doctor, lawyer and philosopher Adriaan Koerbagh fought for thinking for yourself, and warned against on good faith assuming things to be true. He placed using your own reason above dogma, and thought religion was irrational. He is seen as a radical freethinker. He was punished for his freethinking by being locked up in the Rasphuis, a prison where he had to grate wood that was used as a coloring agent. He died a year later because of the hard working conditions. This shows the limits of the press freedom in seventeenth-century Amsterdam. Although the freedom of the press was much greater than in other European cities, it was not nearly the same as we know it today. 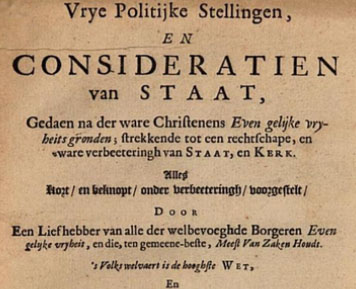 Van den Enden was far ahead of his time. He was one of the first to oppose slavery, he advocated free education to make sure everyone could develop their talents, and he was pro democracy, as becomes clear in this quote. He taught Latin at the Latin school on the Singel, which was most likely based at number 267. But besides Latin, he also taught his pupils, including Spinoza, to be critical and independent thinkers. He died in Paris, where he received the death penalty for participating in a revolt against the sovereign. 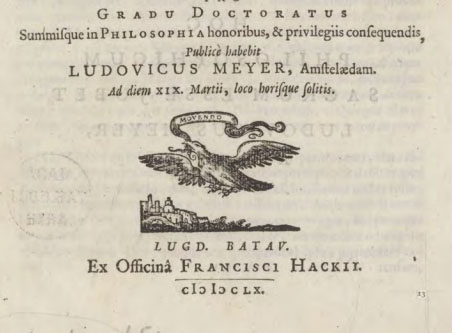 Under the title of philosophy, we understand not opinions and conjectures of others, but true and indubitably certain knowledge concerning the nature of things, which reason, free from any veiling prejudice draws forth. (1666)

Lodewijk Meijer is seen as the precursor of the Enlightenment, because he advocated using reason when trying to understand the stories from the Bible. He placed the findings of reason above that what the pastor tells. The book where the quote is from, is called ‘Philosophy as the Interpreter of Holy Scripture’.

For a long time, the book was attributed to Spinoza and immediately prohibited. Meijer foresaw this prohibition and therefore published it anonymously. Besides being a doctor, playwright, and philosopher, he was also a managing director of the first theater on the Keizersgracht. His idealism is expressed in this as well: he encouraged people that could not or did not want to read, to also think for themselves: through theater. 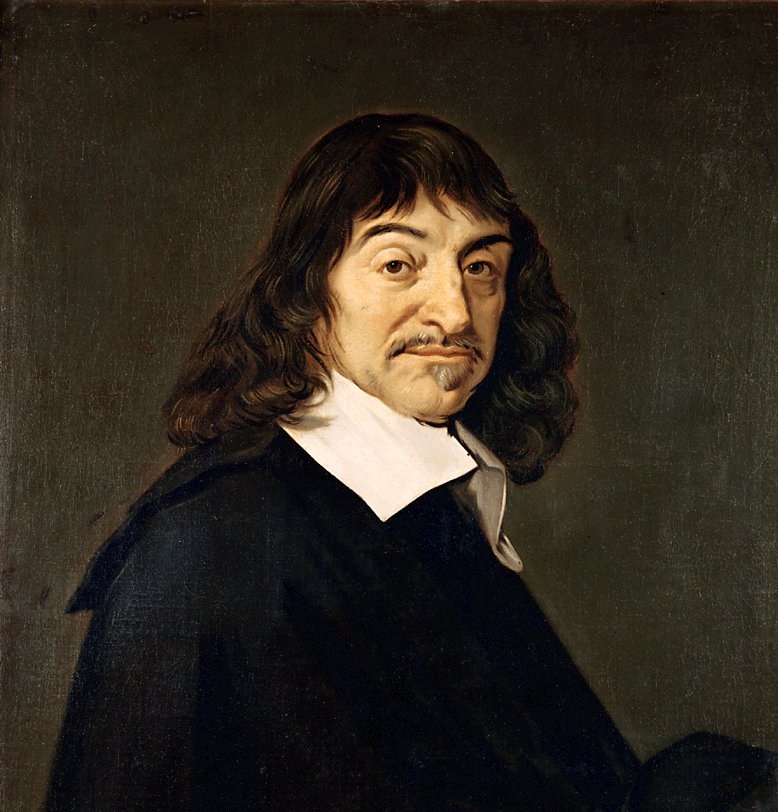 I think, therefore I am. While I was trying in this way to think everything to be false it had to be the case that I, who was thinking this, was something. (1637)

Descartes is seen as the father of modern philosophy. Mainly because instead of God, he gave mankind a central place in our thinking. He looks for something that he can state with absolutely certainty. He discovers that his only certainty is that he himself exists: ‘I think, therefore I am’. Starting from this basis, he can expand his thinking. You can read where he ends up at the second tile about Descartes. 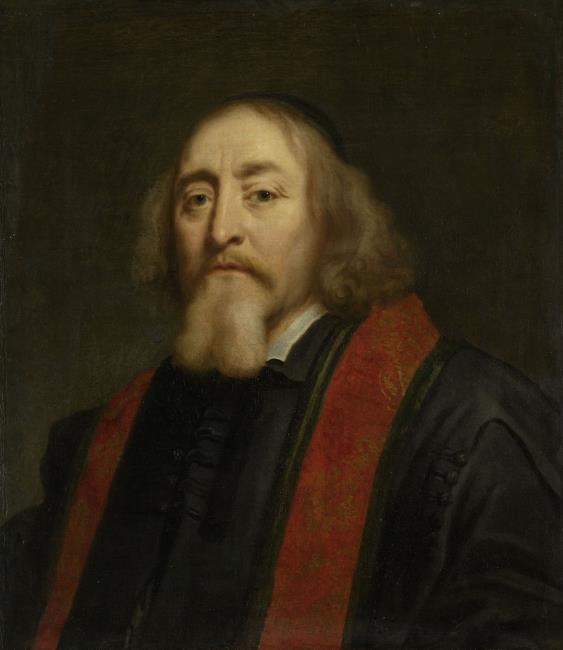 A school that fulfills its function perfectly is a true forging-place of humanity; the minds of those who learn are illuminated by the light of knowledge. (1657)

Comenius was an advocate of education for all children: girls and boys, rich and poor. He also was an important innovator of education. He developed for example an encyclopedia with images that could be understood by children.

The quote on the tile is from the ‘Didactica Magna’, published in 1657 in Amsterdam. This book is still read by didactic scolars.

Comenius was born in the Czech Republic. He had to flee this country when protestants where no longer tolerated after a change in power. In Amsterdam Louis de Geer gave him shelter in the famous ‘House with the Heads’. De Geer helped many refugees, mostly financialy. 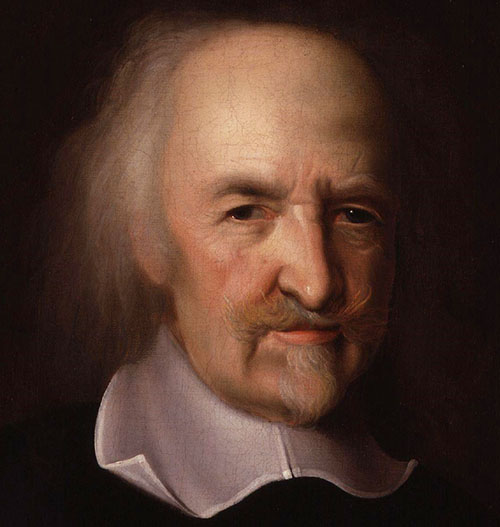 Life in the state of nature is solitary, poor, nasty, brutish, and short. (1651)

The most famous book by Hobbes is called the Leviathan, published in Amsterdam on the Molsteeg. The central idea in this book is that people without a strong sovereign, also known as Leviathan, would be in a state of nature. The title of this work refers to the sea monster that can be found in the Bible, and that has an enormous power.

According to Hobbes, the state of nature is not peaceful and heavenly; on the contrary. Everyone is self-centered and harms other people for their own self-interest. A strong sovereign is necessary to curb these forces. The sovereign can punish and even use violence to make sure everyone abides by the rules. The subjects voluntarily give their power to the monarch to be protected against others and themselves. In the quote, Hobbes clarifies how horrendous life would be without a strong sovereign. Of course, many have pointed out that enforcement of rules can also be arranged in different ways, without a strong sovereign.